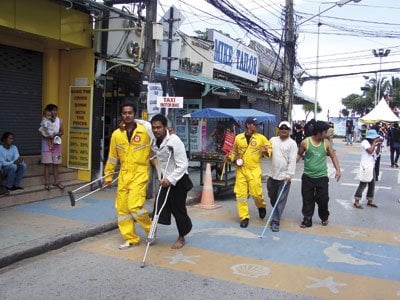 PHUKET: The head of Thailand’s Department of Disaster Prevention and Mitigation (DDPM) pronounced this morning’s tsunami evacuation drill in Patong an overall success, but said he would call for an increase in the volume of the “siren song” from the Soi Bangla tower so that it can be better heard in windy conditions.

More than 1,000 people, mostly students from the three local primary schools, took part in the exercise, which some have quipped is Patong’s answer to the “running of the bulls” in Pamplona, Spain.

In what, in many ways, resembled the start of a marathon, participants registered beforehand and then gathered at the starting area – the section of Patong Beach near the intersection of the beach road and Soi Bangla.

After the alarm sounded at precisely 9:50am, able-bodied “evacuators” began running the well-worn route up Soi Bangla. Ignoring the morning desolation of side sois like Soi Easy, Soi Crocodile and Soi Seadragon, smiling participants ran straight to the relative safety of the Jungceylon shopping complex on the other side of Rat-U-Thit 200 Pi Road.

As in years past, some of those pretending to have suffered injury from the hypothetical inundation were lying on the beach road or up in palm trees, covered in fake blood and putting their acting talents to the test by moaning in agony or screaming for help.

Other volunteers treading water in monsoon-season seas offshore were plucked to safety by workers from a Royal Thai Navy Marine Tourism Security Unit.

Notably absent from this year’s show, however, were Royal Thai Navy frogmen dangling by rope from helicopters.

Mr Wiboon announced the drill officially over at about 10:40am. Although overall quite pleased with the drill, he said he would ask the National Disaster Warning Center (NDWC) to find a way to increase the decibel output near the police box at the base of Soi Bangla – the first-built of the 127-unit network of NDWC warning towers in the six Andaman Coast provinces.

Could you hear it? As in past tests of the NDWC tsunami warning system, the Gazette asks for reader feedback. How did the evacuation drill go in your area? Could you hear the siren? Do you think the system is effective?

Have your say by posting a comment in the readers’ forum below.