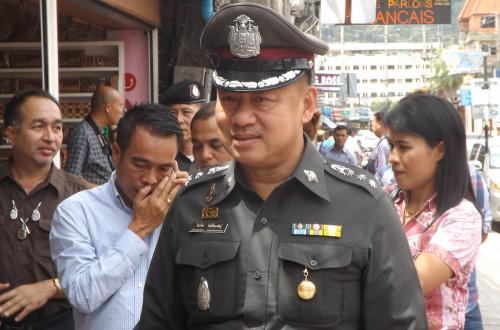 PHUKET: The chief of police in Phuket’s premier party town of Patong has confirmed that he has yet to receive any order to launch a crackdown on lewd shows on Soi Bangla.

“As soon as we receive such an order, we are willing to do whatever the order demands,” Patong Police Superintendent Chiraphat Pochanaphan told the Phuket Gazette this morning.

The news follows reports of Tourism and Sports Minister Somsak Pureesrisak apparently telling at least one reporter on Tuesday that he would order a crackdown on Patong’s renowned “adult entertainment” shows that feature ping-pong balls and other paraphernalia.

Yet when speaking to the Gazette at the opening of Phuket’s new Tourist Court on Tuesday (story here), Minister Somsak said he was aware of the tweets posted by global celebrity Rihanna that had sparked worldwide controversy over Patong’s renowned shows (story here) – but would leave the matter in the hands of “the relevant authorities”.

“I am aware of the news. The relevant authorities are taking care of it. I have not ordered any local officers to take action about this,” he said.

“However, I will raise the issue with Prime Minister Yingluck Shinawatra, and if she decides we should take further action, we will. Patong is a key tourism destination. We are keeping our eyes on it,” Mr Somsak assured.

Meanwhile, Col Chiraphat said that his officers rounded up yet another slow loris tout on Soi Bangla early yesterday morning, the third in as many days (story here).

Pichet Pimrat, 27, from Phitsanulok, was arrested with a slow loris – a vulnerable and protected species – and a camera at about 2am, said Col Chiraphat.

“He was charged with possession of a protected species without a permit,” he said.

“This is routine police work. We have not received any special order to enforce this law. Police are on the lookout for animal touts every day,” Col Chiraphat said.

“With every arrest of such touts, we hand the slow lorises over to the Environmental Conservation Division at Khao Phra Thaeo Wildlife Sanctuary in Thalang. However, touts keep getting their hands on them somehow,” he said.

“These people keep coming to Patong to make money, and we will keep doing our job of arresting them until they are no longer in Phuket,” Col Chiraphat vowed.

Water stoppage to hit parts of Phuket on Monday