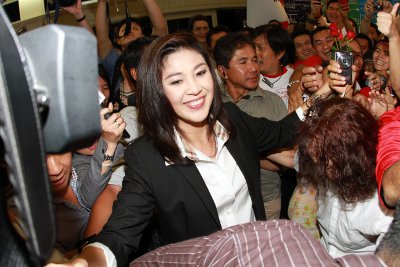 PHUKET: Phuket will be under a high-level security crackdown ahead of Prime Minister Yingluck Shinawatra’s visit for the Cabinet meeting on Monday and Tuesday.

“We have planned to control people in order to prevent any protests or movements against PM Yingluck or any Cabinet members while they are here. I don’t want any negative image to be presented during the mobile Cabinet meeting,” an officer from the Intelligence Center of the 4th Army Area Command explained.

“But there will be no violence. It will be a peaceful occasion. We have already assigned a troop of soldiers to react should something bad happen,” he said.

Governor Tri expanded on the deployment of security personnel, saying, “We have 985 police officers from Phuket Provincial Police, a troop of Navy, Army and Border Patrol Police to ensure the event passes trouble-free.”

Phuket City Traffic Police chief Lt Col Narong Kittipongwiwat told the Phuket Gazette that road blocks will be kept to a minimum during the Cabinet’s visit.

“We do not have any specific times that the roads will be temporarily closed to traffic since the Cabinet members will not be arriving at the same time, but when they do arrive the roads will be closed for only five to 10 minutes at the most [for each minister],” Lt Col Narong said.

The main roads that PM Yingluck and Cabinet members will be using are the bypass road heading toward the meeting venue at the Prince of Songkla University (PSU) Phuket campus and the roads from Karon heading toward the PSU, he added.

With the Cabinet meeting to be held on Tuesday, Gov Tri announced details of PM Yingluck’s itinerary for Monday.

“Prime Minister Yingluck plans to visit the Mukdara Resort and Spa at Takuapa in Phang Nga, where she is to discuss funding for women’s groups in the Andaman. Following that she intends to visit the Tsunami Memorial monument and the beached Tor 813 boat at Bang Niang [near Khao Lak],” he said.

“On returning to Phuket, the prime minister will inspect the site of the proposed Klong Koh Pee Road in Saphan Hin and open the OTOP fair at Saphan Hin Park, before inspecting the meeting venue at PSU,” he said.

To conclude her tour on Monday, PM Yingluck will be escorted to her accommodation at the Hilton Arcadia Resort and Spa in Karon, said Governor Tri.