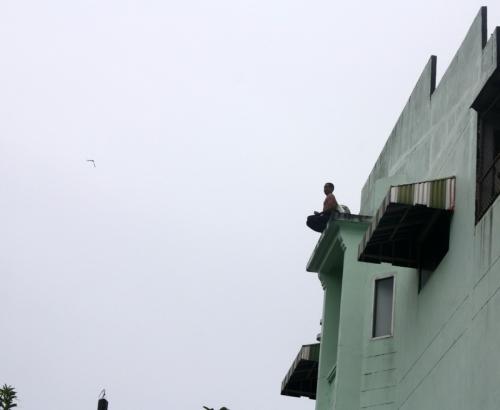 PHUKET: A security guard sacked after two days on the job in Phuket was talked down from a four-storey building in Phuket Town yesterday after he threatened to jump.

Police arrived at the Phoonphol Night Plaza just before 4pm, along with Kusoldharm Foundation rescue workers and a medical team from Vachira Phuket Hospital.

Officers were dispatched to the rooftop to begin talks with the man, 50-year-old Singha Noratat, while an air mattress was quickly set up below.

“We contacted one of his relatives, Pennapa Kansan [who lives in Phuket]. She arrived and talked to him on the phone from the base of the building,” Phuket City Police Superintendent Sermphan Sirikong said.

After two hours of talks, Mr Singha agreed to safely come down from the rooftop.

“He had been in Phuket only four days,” Ms Pennapa said. “He used to be in the monkhood in Kalasin province. He left the monkhood in April, so we suggested he come to Phuket to work as a security guard.

“He worked there for only two days. He called in sick today [June 13], and was then fired. I went to check on him at his rented room, which is not far from here,” Ms Pennapa said.

“Then I got a call from the police at about 5pm telling me he was threatening to jump from the top of a building, so I rushed here,” Ms Pennapa said.

Mr Singha has no idea why he was fired. He said his new work colleagues did not like him, Col Sermphan said.

Mr Singha was escorted to Vachira Phuket Hospital, where he was examined before being released into the care of Ms Pennapa.