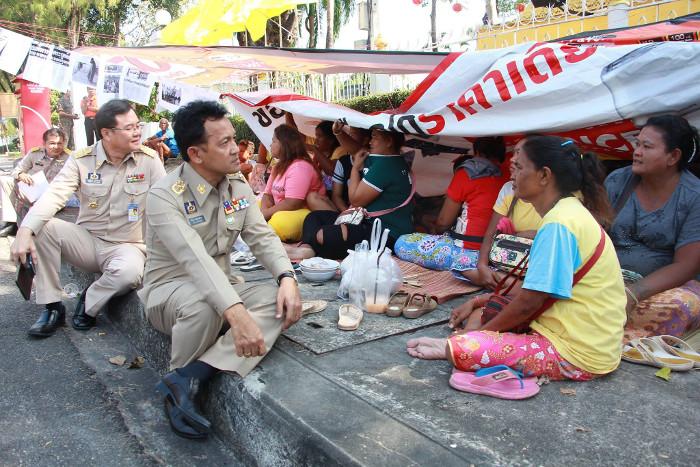 PHUKET: Sea gypsies in Rawai have taken their case to the capital to plead for intervention from the country’s top brass, after being threatened with eviction from beachfront land by developer Baron World Trade Co Ltd.

Representatives from the sea gypsy community handed a letter to Deputy Prime Minister Gen Prawit Wongsuwan on Wednesday, but did not get an immediate response.

Meanwhile in Phuket, Baron World Trade, along with 10 other people claiming land ownership of where the gypsies reside, held a press conference at the Phuket Merlin Hotel to present their side of the story. They plan to submit a letter to the Prime Minister.

“We want the central government to check with all the relevant officials involved. We want to transparently prove that we owned the land before the sea gypsies. The truth will be revealed and the problem will be solved,” said Sathuen Mookdee, speaking on behalf of the land owners.

Baron World Trade claims to own 33 rai in the area, while the other 10 individuals claim ownership of another 19 rai.

“People accuse us of stealing the land from the sea gypsies, but in fact, our ancestors were there before them,” said Mr Sathuen.

“My grandfather, Than Mookdee, originally allowed about four or five sea gypsy families to stay on his land so they could look after our coconut plantation, but now there are more than 300 families there.”

As proof of their claims, the land owners presented old tools and equipment used for coconut farming by their ancestors.

Baron World Trade representatives complained that despite paying more than one billion baht for the land, they are being prevented from using it.

While sea gypsy representatives in Bangkok await word from the Prime Minister’s office, a large contingent of sea gypsies remain camped out at Phuket Provincial Hall. The group has been there since Monday, waiting for word from Phuket Governor Chamroen Tipayapongtada.

Governor Chamroen asked for calm on both sides while investigations continue into the land dispute.

He said the sea gypsies camped out at Phuket Provincial Hall should be provided for to ensure their health and safety during the sit in.

Sea gypsy spokesperson Nirund Yangpan said that the group would stay camped at Provincial Hall until they receive updates on the current investigations.

“First, we want to hear the results of investigations into the right of access to our ceremonial grounds,” said Mr Nirund. “Second, we want an update about the proposed new pathway (story here), and third, we want to know if it was legal for the military to help Baron World Trade block access to our community on January 25.”

“We also want to know what is being been done about the physical assault on our people,” he added, referring to a violent confrontation between investors and the gypsies last month (story here).

Hundreds of passengers skate through Krabi immigration during blackout