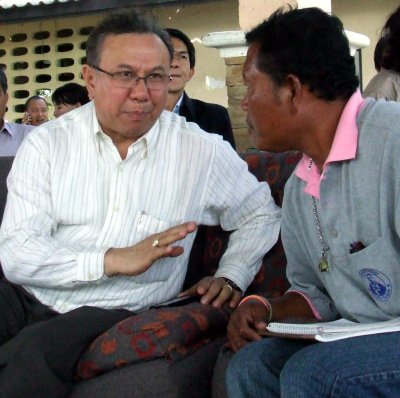 PHUKET: Phuket sea gypsy villagers at Laem Tukkae are living in fear that access to their ancestral burial ground will be closed permanently.

The issue was raised directly today with Somchai Seanglai, Deputy Permanent Secretary at the Ministry of Culture, who led a delegation of officers to the area to hear a variety of complaints from the villagers.

The graveyard is on the southeastern corner of Koh Sireh, about five kilometers from Laem Tukkae village.

“The graveyard has been our traditional burial ground since before I was born,” said Sorod Pramongkij, 49, who has lived at Laem Tukkae all his life.

Access to the graveyard used to always be open, he explained, but about 10 years ago access was cut off by a private landowner who bought 18 rai which stands between the graveyard and the public road.

Mr Sorod said access has always been granted when a funeral was being held, but sometimes when villagers wanted to visit relatives’ graves they were denied permission to cross the land.

When permission is denied, the villagers must trek about a kilometer along the beach to reach the graveyard.

“We are afraid that access to the graveyard will be closed permanently in the future and we don’t want to lose our ancestral burial ground.” he added.

“We have repeatedly filed formal complaints asking government officers to solve this problem, but nothing has been done,” Mr Sorod said.

Mr Somchai said the issue will be raised at a meeting tomorrow afternoon at Phuket Rajabhat University.

Of the other problems to be raised at the meeting tomorrow is a request from the villagers for the government to build a small sea wall to stop waves from damaging the simple houses of 11 families.