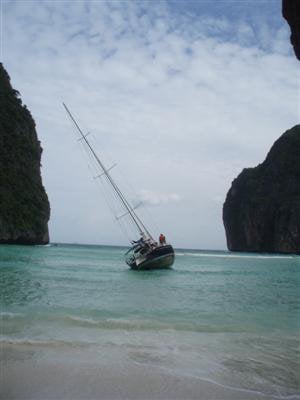 The Chrysalis-T remains precariously balanced just off the shoreline in the well-known tourist hot-spot in Krabi, where the 2000 Hollywood film The Beach, starring Leonardo DiCaprio, was filmed.

The English owner of the French custom-made vessel told the Gazette he was “very busy trying to get the boat out” of its current position.

A source told the Gazette the salvage effort could take up to two weeks.

There are two options to leverage the yacht free, he explained.

“One option is to wait for the highest tide possible, tie lines to the yacht and use a tug boat to move it from its position.”

“The other option is to once again wait for the highest tide of the month, position airbags underneath the boat, and then as the tide comes in, float the boat above the waterline. Then a tugboat can be used to get the boat free,” the source said.

Initial reports indicate there is no extensive damage to the yacht’s hull, but closer inspection will be necessary if and when the vessel can be dislodged and put in dry dock at its home port, the Boat Lagoon, in Phuket.

On the day of the grounding the yacht owner’s family were aboard, but the owner was not.

All made it out of the vessel safely.

The family were taking a few days holiday sightseeing and sailing around Phang Nga Bay when their fun came to a grinding halt.

Severe weather, crew error, or both may have been contributing causes, the source said.

The boat arrived in Phuket in late 2008, after five years as a luxury charter vessel in the Caribbean.

The grounding is the last high-profile sailboat grounding in local waters since the 38-foot sailboat Sultan beached at the south end of Patong Beach during a storm in June 2007 and became an instant tourist attraction.