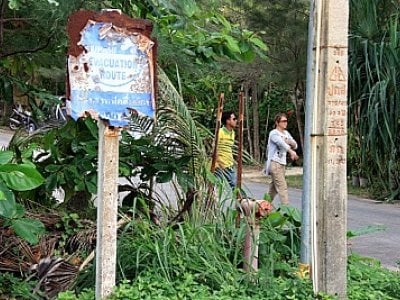 PHUKET: The National Disaster Warning Center (NDWC), at 3am this morning, canceled the tsunami alert (not ‘warning’) that had been put in place as a result of an undersea earthquake off the west coast of Sumatra at 12:37am.

Director Somsak Khaosuwan told the Phuket Gazette this morning, “The warning was canceled at about 3am as the predicted time for a tsunami to strike the coast at 1:30am had passed.”

The USGS released a report explaining that the earthquake had been caused by a strike-slip fault, meaning two tectonic plates moving sideways past each other.

The Indo-Australia plate moving north at a speed of 52 millimeters a year past the Sunda plate causes friction and occasionally earthquakes, the USGS reported.

“After we received the alert from the NDWC, weclosely monitored the situation in case we needed to sound the tsunami warning [sirens in the towers].It would have sparked chaos if we immediately sounded the warning without firstconfirming with the NDWC that a warning was to be issued.”

DDPM chief San said he also took the opportunity to check with the NDWC that the tsunami-waring system was fully operational.

“They confirmed that it was and that they conduct regular tests,” he said.