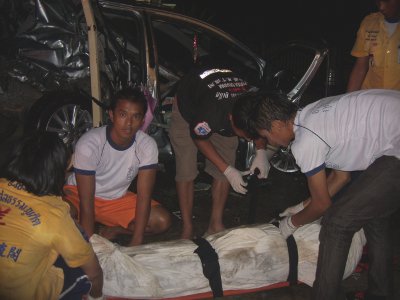 PHUKET: High-season mayhem continues on Phuket roadways, with one man dead and two others in ICU in separate road accidents in recent days.

Yesterday morning, 31-year-old Apiwan Wongcheu sustained severe head trauma, a broken wrist and other injuries when the motorbike she was riding along Chao Fa West Road northbound in Chalong was struck by a southbound truck turning across traffic into a side street near Baan Chalong School.

Phuket Ruamjai Kupai Foundation workers rushed the woman to Vachira Phuket Hospital, where she is being treated in ICU.

No further information is known about the identity of the woman, as she was not in possession of an ID card at the time of the accident.

Earlier, on Tuesday night, a man was killed when his Toyota sedan was hit from behind by a pickup truck on Thepkrasattri Road southbound at about 9:45pm.

The force of the impact rammed the sedan into a support pole at the front of a roadside home.

The deceased was identified by his Thai ID card as Tara Prateep Na Talang, a 66-year-old resident of Rassada Village 1.

Kusoldharm Foundation workers rushed the driver of the pickup to Thalang Hospital for emergency treatment.

Both vehicles were damaged beyond repair, rescue workers said.

Thalang Police are still investigating the cause of the crash.

What’s in this week’s Phuket Gazette?