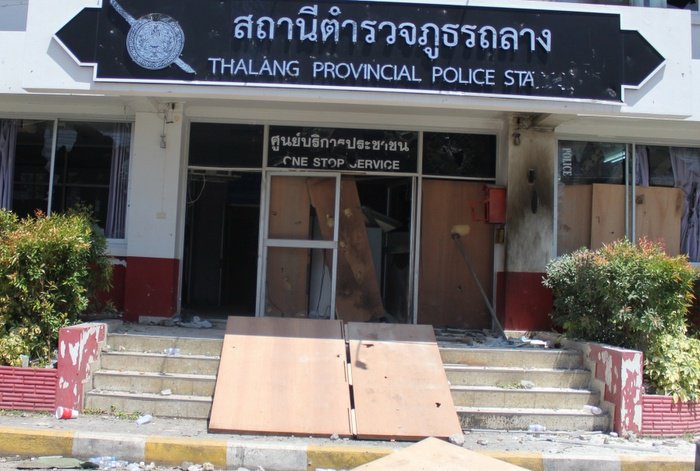 PHUKET: Initial estimates of the cost of damage caused by the riot at the Thalang Police Station amount to more than 6 million baht, confirmed Thalang Police Superintendent Chanuchan Cholsuwat.

“However, this is just how much it will cost to repair the vehicles set on fire and the damage done to the building,” Col Chanuchan said. “We are keeping a list of everything that must be taken care of as we go. This isn’t the final financial cost of the attack.”

Officers estimated that the mob caused about 1.4mn baht worth of damage to the building and 5mn baht in damage to vehicles at the station.

Though repairs are underway, the Thalang Police Station is fully operational and functioning as normal, Col Chanuchan said.

“We want the police to be strong and continue to act with transparency as they fulfill their duties and responsibilities,” said Pongsak Wisut, a representative from a number of property and hotel businesses that have made donations to the police station following the attack.

“Phuket is a tourist destination, and a riot like this can damage the reputation of the island and Thailand. We never want this to happen again.”