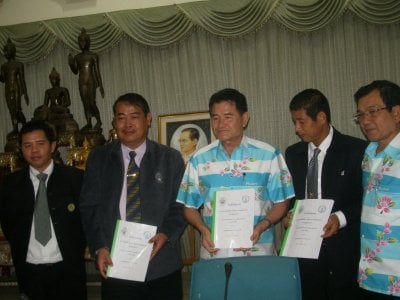 Mr Weerawat told the Gazette that the 300-million-baht project will be a step toward alleviating drought-related problems and supporting population growth by improving existing water sources.

The project, which is touted as a pioneering example of public-private partnership for sustainable development, will see the one-kilometer dam raised by about 1.5 meters, increasing the reservoir’s capacity from 7.3 million cubic meters to 10.2 million cubic meters.

Hot on the heels of a Phuket Gazette story in this week’s issue about the Klong Krata reservoir project stalling, Gov Wichai also announced that the Ministry of Natural Resources and Environment has approved the use of a 60-rai plot of land needed for the construction.

The request for the land was made by the PPIO about three years ago. The approval was a final obstacle to the project, which has been “unofficially” scheduled to begin this September.

The Gazette will follow with more details after an official announcement is made.