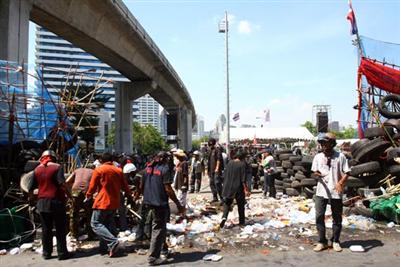 PHUKET: About 40 Phuket residents remain part of the United Front for Democracy Against Dictatorship (UDD) protest in Bangkok, now in its 51st day at the Rajprasong intersection in Bangkok.

Speaking to the Gazette by mobile phone from the protest site this afternoon was Phuket red shirt leader Wisut ‘Ae Inside’ Tangwittayaporn, who has been part of the protest since day one.

“Everyone [from Phuket] here is fine, nobody is hurt. Sometimes we are entertained by music or comedy shows. We are happy here,” he said.

Mr Wisut said some 400 Phuket red shirts joined at the beginning, but the length of the protest has forced some to return home after running out of money. Most of the Phuket contingent is now operating on a rotational basis, he explained.

“When we run out, we return home for more money, food and supplies, then we return and share them with our fellow protesters. We are like brothers and sisters, all of the same heart. We were not hired to come,” he said.

Asked about the recent ‘mixed shirt’ protests around the country that have come out against the UDD actions in the capital, Mr Wisut said, “It’s their right to protest, but I think they should just come out and say plainly which side they are on. It is very obvious who their leader is. I chose to be red and I am not afraid. Everyone has a basic right to choose; nobody can force you.”

Mr Wisut said he joined the protest so that his children would not have to endure the same ‘injustices’ that he says he has experienced first hand.

“Nobody has forced me to be here and I don’t force anyone to join me, I only ask people to hear both sides so they can see the truth,” he said.

“I would like to thank all the red supporters in Phuket, who always keep in touch and encourage us, showing us they care. We are all fine here and proud to be on the side that is seeking real democracy for all,” he said.

Asked when he plans to return to Phuket, he said, “I will stay here until one side or the other wins.”

Phuket not immune to red damage