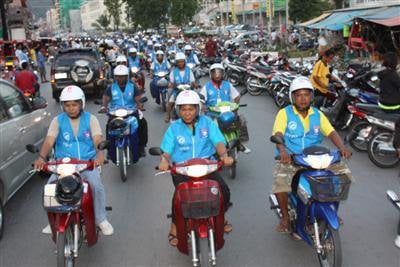 PHUKET: Phuket City Traffic Police have been ordered to take more serious action against motorcyclists riding without helmets by fining passengers as well as drivers.

The order was issued by Phuket Police Commander Pekad Tantipong as part of a crackdown that starts today.

Phuket City Police Commander Pekad Tantipong said police will enforce the law day and night, with nighttime checks less frequent because of a lack of officers.

An often-ignored Thai traffic law states that both drivers and passengers without helmets can be fined up to 500 baht. A driver transporting a passenger not wearing a helmet is subject to an additional fine of up to 1,000 baht.

The Phuket Land Transport Office has run public service announcements on a local cable television channel in recent months warning motorbike passengers they face fines if caught without a helmet.

One shows a woman who denies a request by a motorcycle taxi driver to don a helmet running up the street with a police officer in hot pursuit.

In reality, such scenes are virtually unknown in Phuket, where most people are unaware of the law because it is so seldom enforced.

But all that is set to change under the new crackdown, Maj Gen Pekad said.

Some riders who flaunt the law will not be left empty-handed after forking over cash for their fines, however.

As part of a public awareness campaign, Phuket City Police have prepared about 3,000 helmets to give away free to offending drivers before the July crackdown.

According to statistics provided by the Phuket City Traffic Department, which covers five tambons in Muang Phuket District, accidents and fatalities are on the rise.

Many deaths and serious injuries are the result of motorcyclists not wearing helmets.