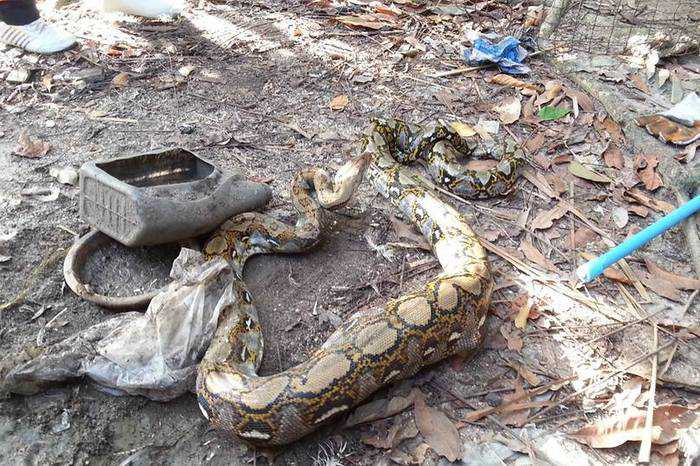 PHUKET: A Phuket resident was caught off guard when he discovered that a four-meter python had swallowed one of his favorite ducks this morning.

“I heard my one of my ducks quacking in alarm, so I ran outside to its cage to make sure everything was okay,” said the duck owner, who asked not to be named.

“My duck had already been eaten by the time I got there. I didn’t know what to do, so I called the police.

“The snake was probably hungry and looking for food. I am just thankful that no one was hurt.”

Police arrived at the scene in the Kok Tanod community in Chalong and immediately spotted the python, whose belly was engorged from its meal, Sen Sgt Maj Somboon Khanpet of the Chalong Police told the Phuket Gazette.

“It could not move anywhere, as it had just ingested the duck. Ruamjai Rescue workers spent only a few minutes safely bagging the snake so that they could move it to a jungle location to be released,” Sgt Maj Somboon said.

Sgt Maj Somboon urged island residents to beware of snakes during the monsoon season, as they tend to search for shelter indoors during heavy rain.

On Sunday, a man’s prize cock was gobbled up by a 20-kilogram python in Thalang. It too was quickly caught and released in a jungle location (story here).

“Snakes may wander into your house looking for food and a dry place to live. Please be careful,” Sgt Maj Somboon said.

“If you need help, please call 191 so that we can contact experts to remove the snake for you.”