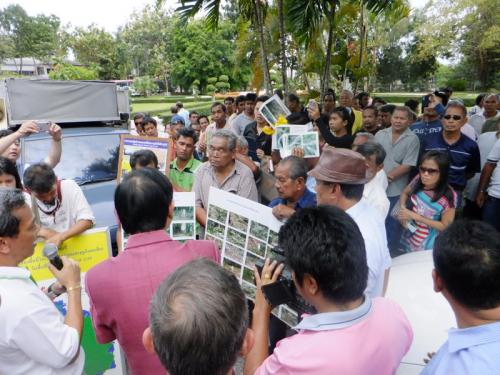 PHUKET: About 200 villagers rallied at Phuket Provincial Hall on Tuesday to push for a bridge name change that is already on its way and for the right to plant and farm rubber trees on land that is deemed to be within a protected forest.

Mr Utai called for Phuket’s most recently completed bridge joining the island to the mainland to be formally granted the name Thao Srisoonthorn Bridge – the same name that has always been agreed to for the structure (story here).

“The bridge opened on August 1, 2011, and is still unofficially called by its project name ‘Sarasin Bridge 2’ set by the Phuket Highways Office,” he said.

“It doesn’t make sense. We already have Sarasin Bridge and another bridge named after one of our heroines, Thao Thepkrasattri. As Phuket has two heroines, the third bridge should be named after the other heroine, Thao Srisoonthorn,” he said.

“So far there has been no sign installed showing the name of the bridge, so we are giving the government 90 days to install a sign naming the bridge Thao Srisoonthorn Bridge,” Mr Utai warned.

However, Mr Utai did not elaborate on what exactly would happen if the deadline was not met.

The director of the Phuket Highways Office, Samak Luedwonghad, on Wednesday explained to the Phuket Gazette that the formal name change for the bridge has been in the works for two years.

“The request to officially name the bridge after a Phuket heroine requires permission from the Royal Household. However, after we sent the request to our head office in Bangkok, the floods of 2011 struck and officers at our headquarters forgot all about it.

“I have now reminded them and the request is underway again,” he said.

However, that was not all the protesters were rallying for – they also wanted the right to plant and farm rubber trees on land in Thalang that they say they had already been using as a rubber plantation, but that officers at Khao Phra Thaeo Wildlife Sanctuary claimed was inside the park.

“We had cut down old rubber trees and planted new saplings on the same land – but officers destroyed the saplings, saying that we had planted the trees inside the park,” said Mr Utai.

“I want the governor to give us the right to cut down old rubber trees and plant new ones on this land. I don’t want officers cutting down our trees.

“I want the government to issue documents that permit us to have the right to work this land,” he said.

Governor Maitri said he would look into both matters.

“I will call the relevant departments to find solutions to help you as soon as possible,” he said.