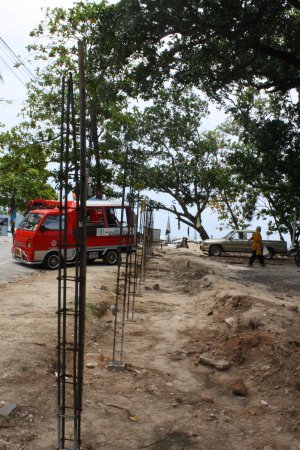 KATA, PHUKET: More than 100 local residents yesterday gathered at the Club Med Hotel in Phuket to protest construction of a concrete wall enclosing the resort’s property.

Protester Pradit Thamwatthana said hotel staff began staking out the position of the wall with bamboo poles two weeks ago.

The 1.5-meter-high wall would seal off six rai of land that in recent years has been open to the public.

Work on the project has progressed to the point where concrete forms have already been laid and fitted with rebar, though concrete has yet to be poured.

Part of the wall would run along Pakbang Canal, which channels drainage and wastewater into Kata Bay and is also port to some 40 longtail boats.

Boatmen who were among the protesters say the wall will block a designated tsunami evacuation route and damage mangrove forest lining the canal.

They have asked Karon Municipality to survey the area and review land title deeds to ensure the construction does not take place on public land.

An English-language sign presented by the protesters read: “Stop destroying our mangrove” while a Thai-language banner read: “We don’t need a wall, we need nature”.

Karon Mayor Tawee Thongcham said he understood the opinions of both sides, but added that the municipality had yet to grant permission for the construction.

“Club Med has been renting this land from the owner and has the right to erect bamboo markers delineating the boundary. The hotel has been asking for permission to build the wall, but it has never been granted by the municipality. We will have to sit down with both sides to work out a mutually acceptable solution,” he said.

“We don’t want any problems with the local people so we are happy to do what is best for both sides,” he said.

Club Med has rented the land in question for over 20 years, he said.

“Before we had a wooden fence enclosing the property and any longtail boatmen who needed access simply had to ask. After the tsunami cleared the area it was left open and many people have come to believe it is now in the public domain. We decided to build the wall to show our boundaries, but they have asked us not to build a wall or fence of any kind,” he said.

Land Department officials will survey the area soon and the project will remain on hold until then, he said.