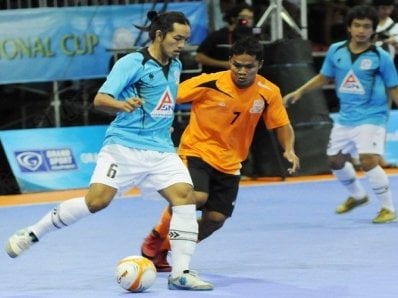 PHUKET: Both of the island’s national-level sports teams have important matches lined up, today and tomorrow.

In 11-a-side football, the Phuket FC “Islanders” are ready to host Khon Kaen FC “T-Rex” at Surakul Stadium in Phuket Town with a 6:30pm kickoff this evening.

Both sides will be fighting hard for all three points to help them steer clear of relegation, with only four match remaining, including tonight’s fixture.

Ranked 13th in the 18 team Yamaha 1 league, Khon Kaen with 33 points are only slightly ahead of 15th placed Phuket (31 points).

Tensions are expected to be high in this “sink or swim match”, and local fan support is encouraged.

When the Thai football season concludes later this month, the bottom five teams will be relegated to the second division, with the top three sides gaining promotion to the Thai Premiership.

Competing in their inaugural season of the country’s elite league, the Island’s 5-a-side professional side, Phuket United will commence their season tomorrow at 2pm with a match against the Highways Department Futsal Club.

The first two days of competition represent the league’s unofficial start, with competition to take a long break ahead of the FIFA Futsal World Cup 2012, to be staged in Thailand for the first time, from November 1-18.

Check the Phuket Gazette website for all the latest results and updates.

Call for blood donations ahead of Phuket Vegetarian Festival