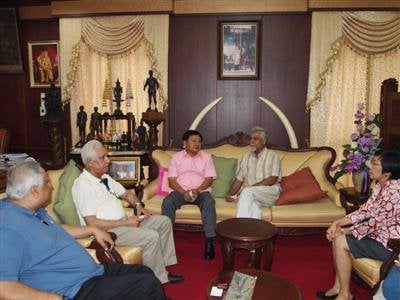 PHUKET: The island is prepared to host a number of lavish wedding ceremonies for Indian couples tying the knot in 2012, with top Phuket officials offering their help to smooth the way for wedding parties.

Among those planning to hold ceremonies were the parents of one couple who met with Phuket Governor and head of the local Tourism Authority of Thailand (TAT) office on Wednesday to discuss their requirements and to ask for assistance.

The wedding planners came to request special consideration for wedding guests arriving by private charter plane at Phuket International Airport in clearing customs and immigration, as well as for heightened security during the event, to be held from August 9 to 13.

Mr Batra, director of Seahorse Ship Agencies PVT Ltd, was accompanied by his business partner Capt Avinash Batra, who serves as chairman of the same conglomerate.

Capt Somesh said the families are now looking for a hotel to host the reception for some 200 guests and have several venues in mind.

“We chose Phuket for the wedding as I have been here three times already and I like the food and the tourist attractions,” he said.

“Moreover, India and Thailand have a longstanding good relationship,” he added.

Gov Tri said, “We are glad to host you all in Phuket and are willing to assist the couple and their guests. India is emerging as an important new source of tourists to Phuket, so it’s very good to be able to host a wedding on this scale,” he said.

Mrs Bangonrat said the event could further cement Phuket’s reputation as a wedding tourism destination in the Indian market.

Such is the importance of the niche market for weddings and honeymoons that the TAT will have a specially-dedicated pavilion for it at the upcoming Thailand Travel Mart 2012 to be held in June, it was announced in Bangkok on the same day.

“Weddings in Phuket are popular with Asian, European and especially Indian couples because we have so many romantic places,” she said.

The TAT offices in both Mumbai and New Delhi promoted Phuket as a wedding location during an Amazing Thailand Road Show to India 2011 in March last year.

“The first Indian wedding ceremony this year will be held in February, with about 200 guests attending, but there will be dozens more coming to Phuket to marry after that,” she said.