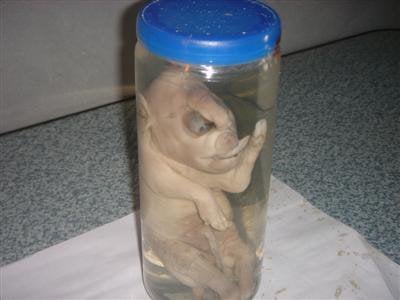 SRISOONTHORN, PHUKET: The talk of the town in Thalang in recent weeks is the birth of a deformed piglet that locals feel bears a striking resemblance to Ganesha, the elephant-headed Hindu deity worshiped by many Thai Buddhists.

The reason for their conviction is a large growth of tissue protruding from the piglet’s head that bears a striking resemblance to an elephant’s trunk, complete with two small holes where an elephant’s nostrils would be.

The only other major difference between this piglet and a normal piglet is that its over-sized eyes protrude out from its eye sockets. The piglet was also born white, while the other piglets in the litter were all black.

Sadly, its resemblance to a Hindu deity didn’t do much to help this little piggy in the real world: after being born in a litter of nine piglets on May 24, it died two days later while all the others survived.

The remains of the piglet, now floating in a Mason jar full of formaldehyde, sit atop a makeshift shrine at the home of its owner, 38-year-old Banjert Khamwiset.

“My main business is running a small grocery shop in front of my house, but out in the back yard I raise domestic pigs… Unfortunately the special piglet died after a day, while the other eight all survived. I think it was too weak,” he said.

“At first I thought it was just a deformed piglet, but when I examined it further I realized it was truly unique. Only one in a million piglets in Thailand are born with a trunk like that of the son of Shiva,” he said.

One man’s mutant is another man’s miracle. Before long, people from the neighborhood came to marvel at the piglet, offering flowers, lighting joss sticks and saying prayers – many hoping the dead porker would somehow convey to them the winning numbers in the upcoming underground lottery draw.

The pickled piglet did not let them down either. Many chose to play combinations based on Mr Banjert’s house number, 14/41, and reportedly came up winners.

Word travels fast in a Thai village and before long people were offering Mr Banjert 10,000  baht for the lucky swine, but he said he would never sell it as he believes it will bring him a lifetime of good luck and enhanced personal charm.

Sumet Mettasart, chief of the Phuket Provincial Livestock Office (PPLO) since the beginning of this year, told the Gazette that the so-called trunk was the result of a genetic mutation that resulted in a problem with the normal cell division process. Similar mistakes also happen with humans, albeit very rarely, he said.

If the owner really wants to know the exact cause of the strange appendage he should hire a geneticist to investigate the DNA sequencing. Such an investigation would confirm that the piglet actually has no elephant DNA, he said.

Concluding that the piglet was just a freak of nature, he cautioned people not to believe in superstition and black magic.