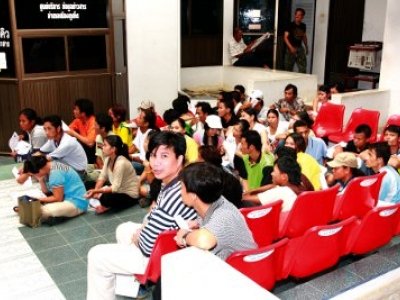 The tally gives Phuket a population density of 967 persons per square kilometer, she added.

However the figures had yet to be confirmed by the National Statistics Office in Bangkok, Miss Prapai said .

“When that is done, much more information will become available,” she said.

Asked whether the Phuket Statistical Office thought the figures accurately indicated the actual number of people living on Phuket, she replied, “No. Of course, these numbers do not include every single person living in Phuket. The system is not perfect.

“Some people do not want to tell us about everyone staying in their house, and Burmese living in labor camps only give us details of the number legally registered Burmese workers living there.

“Even their employers do not really want to tell us how many Burmese they have working for them,” said Miss Prapai.

The Phuket Provincial Employment Office currently records for more than 64,000 Burmese, Lao and Cambodian workers legally residing on the island.

However, prospective employers have recorded the need for more than 100,000 low-wage workers from those countries, she said.

“We agree with the Phuket Provincial Labor Office estimate of more than 100,000 Burmese illegally on the island,” she added.