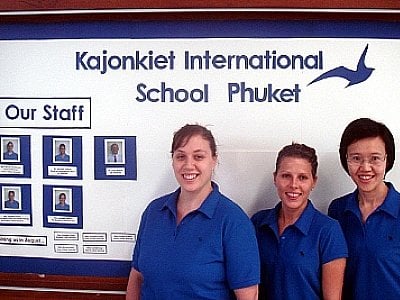 PHUKET: The Kajonkiet group of schools is preparing for a major shift in island demographics and greater demand for English-language education by opening its first international school this month.

Permkiat Ketkul, manager of Kajonkietsuksa School and Chairman of the Phuket Private School Association, said the Association of Southeast Asian Nations (ASEAN) plan to lift cross-border travel restrictions and become a unified economic unit by 2015 was a major factor in the school’s decision to open its Kajonkiet International School Phuket (KISP) on a 45-rai hillside site in Kathu.

The school is expected to cater to an increasingly international island when the agreement between Thailand and fellow member countries Brunei, Cambodia, Indonesia, Laos, Malaysia, Myanmar, the Philippines, Singapore and Vietnam takes effect.

According to the ASEAN Economic Community (AEC) plan, in 2015 there will be free-flow goods, services, investments, capital and skilled labor among the 10 countries.

Once companies within ASEAN are able to move freely within the region, Phuket will become home for new workers and their families, said Mr Permkiat.

First, schools will have to plan for the influx of new students. Second, they will have to prepare their current students for a future where the English language and a global awareness are of utmost importance.

Kajonkietsuksa School is preparing itself for the AEC by launching an International Program at Kajonkiet International School Phuket (KISP), which opens this month.

The school will offer an all-round program using the British National Curriculum from pre-nursery to Year 6.

Kajonkietsuksa now offers various educational opportunities in the form of its Thai, ESC (Thai and English) and English Programs. The English Program, popular with expat residents, follows the Thai curriculum, but with instruction in English.

Each program serves its own unique purpose, said Mr Permkiat. “KISP will be there to help prepare children for the changing economic profile of not only Phuket and Thailand, but the world,” he said.

Kajonkietsuksa School was established in 1954 in order to further educational growth according to the national policy. When knowledge of the English language became more of a necessity, the school expanded to open its English Program in 1999.

“We will be offering a preparation course for all students joining KISP. This will enable a smooth transition into a new program and new curriculum,” he said