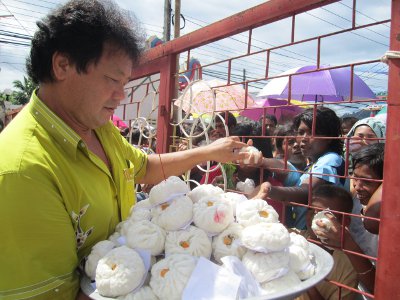 PHUKET: Some of Phuket’s poorest people were on hand at the Kusoldharm Foundation headquarters yesterday afternoon to accept donations of food as part of the annual Te Krajard merit-making ceremony.

The event marks the birthday of the Chinese God Hui Joh that is highly revered by Phuket’s ethnic Chinese community.

As in years past, most of the recipients were from local sea gypsy communities.

The event was supported by Phuket City Municipality and Bangkok Hospital Phuket.

Among the local dignitaries on hand was Phuket Provincial Police Commander Pekad Tantipong.

Mrs Benjawan said the day’s activities were a success and thanked the many people who helped by donating money to help Phuket’s poor people.

“For students who received scholarships today, no matter who you are, study hard and be good, diligent people. It will pay off,” she said.