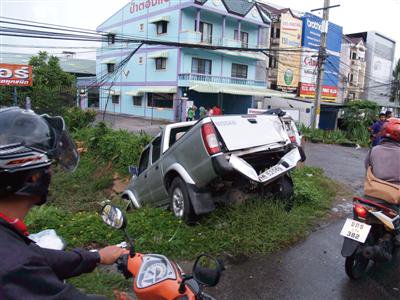 PHUKET: Nearly three-quarters of Phuket Gazette readers believe having to submit a doctor’s certificate when applying for a driving license will make no difference to road safety in Thailand, according to our latest readers’ poll.

Under new Transport Ministry regulations, all new license applicants, and those renewing licenses, will have to submit a doctor’s certificate in order to ensure that health conditions – both physical and mental – will not adversely affect driving performance.

We asked readers if they thought this would make the Kingdom’s roads any safer. Of 333 readers who responded to the non-scientific poll, 73.3% thought the new requirement would make no difference.

Those who identified themselves as foreign Phuket residents were far more cynical than Thai nationals and tourists, with 90% of expats dismissing the regulations as folly, many elaborating their views in the on-line readers’ forum. By contrast, 46% of tourists and Thais thought the regulations would have no affect.

Cynicism over the plan is likely to stem from the ease with which a doctor’s certificate can be obtained in Phuket.

While some hospitals take the process seriously, some clinics in Phuket have been known to issue these documents for as little as 50 baht after a one-minute “examination” of the patient.

Of all respondents, just 14.7% said they thought the regulations would have the desired effect.

Tourists were the most likely to hold this view, with 32% responding “Yes”. Of Thai respondents, 24% agreed the plans were worthwhile, while just 5% of expats did.

Finally, 12% of respondents said they didn’t know whether the regulations would improve road safety.