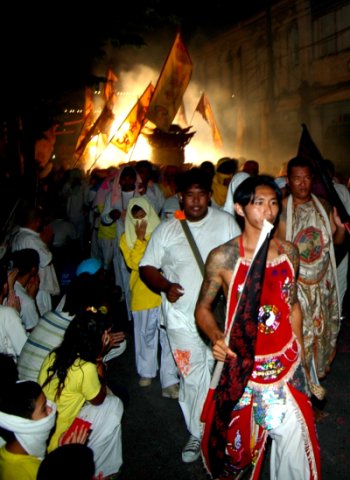 PHUKET: Tonight marks the end of the annual Phuket Vegetarian Festival, which will culminate with shrines holding street processions to Saphan Hin, where the final farewell ceremony for the Nine Chinese Warrior Gods will take place.

There will be no “mah song” spirit mediums taking part tonight, but plenty of fireworks.

Those who shy away from loud noise would be advised to steer clear of Phuket Town tonight, where people dressed in white will wait with firecrackers at the ready to set off when the parade passes.

It is all part of the proper send off of the Gods, which is essential to ensure ritual purification of those taking part.

Those wanting to take part should get to Phuket Town no later than 6pm, when the fireworks will – quite literally – begin.

Good spots to watch are at Surin Circle near The Metropole Hotel and points south along Phuket Road. Participants are advised to use a wet cloth or mask to protect the eyes, nose and mouth.

The other necessity is a set of industrial earplugs.

The parade and subsequent activities will end at around midnight.

The send-off of the Gods is typically followed by a night of revelry, as those who have abstained from meat and alcohol for the entire nine-day period indulge in them once again.