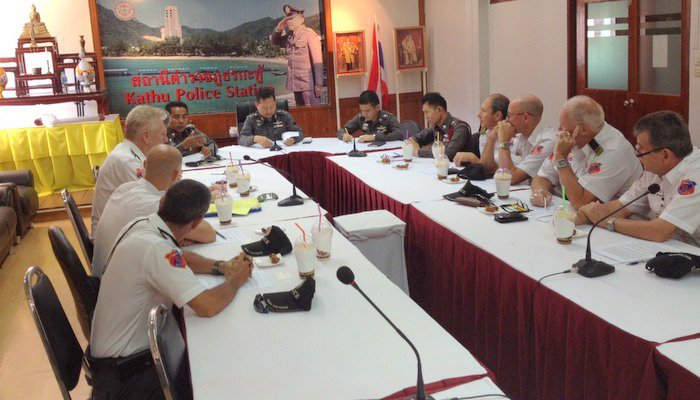 PHUKET: Police volunteers are back on the beat in Phuket’s primary party town, following a six-day strike starting on March 5 (story here).

Region 8 Police volunteers met yesterday with Patong Police Superintendent Chaiwat Auikam and his two deputy superintendents to table a number of growing concerns that led to the strike.

“We voiced our concerns, specifically about the beach and Bangla Road. What we talked about today was [in regards to] the jet-ski scams on the beach and the increase in foreign touts working on Bangla, who are also drinking while on the job on the street,” Mr O’Connor said. “These are ongoing problems in Patong. It will take time for things to be worked out.”

Col Chaiwat confirmed to the Gazette that he would address the volunteers’ concerns about jet-skis and foreign touts, as well as communication issues between volunteers and the new Thai officers.

A breakdown in communication was one of the major issues originally cited by Mr Brown.

Col Chaiwat agreed to have monthly meetings with the volunteers, twice a month if necessary, to ensure that those working to protect the people of Patong were all on the same page.

Additionally, the volunteers highlighted issues with some CCTV cameras on Soi Bangla, which are either no longer working or are set at an ineffective angle. Many of the CCTV were originally placed on the party street as part of the Patong Safe Zone (story here).

Col Chaiwat agreed to also look into this issue to see what could be done.