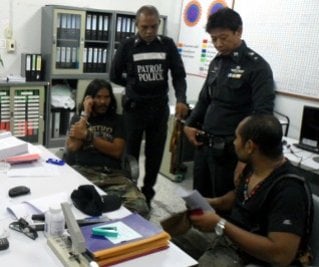 PHUKET: Phuket police making a routine stop at a checkpoint in Thalang early yesterday morning seized 33 grams of heroin after searching a car that was not fitted with any license plates.

Crime Suppression officers led by Inspector Prasarn Thoworn were on duty at a checkpoint in Baan Yamu, Paklok, when a white Kia sedan arrived at 1:30am.

Noticing the car was not fitted with any license plates, officers stopped the vehicle and asked the driver, 35-year-old Wittaya Tiranon, to see the car registration documents.

Believing that Mr Wittaya’s passenger, 42-year-old Polrut Jitnawee, was behaving suspiciously, the officers asked Mr Polrut to step out of the car so they could search him.

On his person, they found 39 red and green ya bah (methamphetamine) pills and 33 grams of heroin hidden in a plastic bottle.

Police also found an air pistol and a walkie-talkie in the car.

The two men were taken to Thalang Police Station for further questioning.

Life of Liberty, after the crash