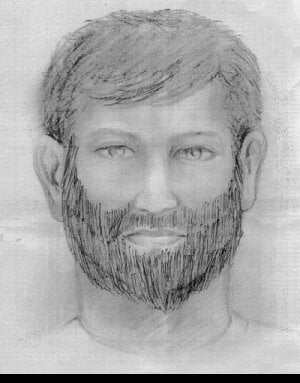 PHUKET CITY: Phuket City Police are offering a reward of 50,000 baht for information leading to the arrest of the killer of 33-year-old bar hostess Wanphen Pienjai, whose naked body was discovered stuffed into a suitcase in Phuket last week.

The offer follows the release of a sketch of the prime suspect in the investigation, a bearded Caucasian man who was seen with Ms Wanphen before she died.

Staff at the Sweetheart Bar on Kata Road where Ms Wanphen worked said that on the morning of June 18 the man came to the bar looking to hire a ladyboy prostitute.

After being told there were none for hire, he paid a bar fine and left with Ms Wanphen on his motorbike.

It was the last time she was seen alive.

Her body was discovered on the morning of June 24 at a remote location on Chao Fah Thani Road, about 1.5 kilometers from the junction with Chao Fah West Road.

Police say they are confident the suspect remains on Phuket. Hostesses at the Sweetheart Bar said the man spoke Thai, indicating that he may be a long-term expat.

The case has shocked the island and terrified Phuket’s bargirls, particularly those working at bars on Kata Road. Many are now fearful of leaving their places of work with unfamiliar customers.

Anyone with information regarding the case should call the Phuket City Police on 076-212115. Or, if you have workable English and need a translation to Thai for reporting purposes, call the Phuket Gazette on 076-273555, and ask for Khun Nee, Khun Jane or Khun Joy.

Couple get lucky with stolen ATM card, then get arrested