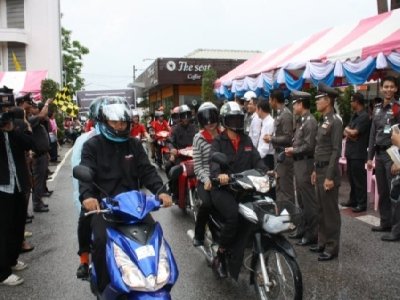 PHUKET: Phuket City Police kicked off their helmet safety campaign yesterday with around 4,000 helmet-clad riders on some 2,000 motorbikes parading down the island’s roads.

From now on, police are pledging to crack down heavily on both drivers and passengers without helmets.

The drivers and passengers participating in the hour-long ride in Phuket Town were students at local schools and universities, motorcycle club members, police and local residents.

At the ceremony, Phuket City Police Superintendent Wanchai Ekpornpit said that for the last few years Phuket has either been at the top of the list or in the top five provinces with the most traffic accidents in Thailand.

Phuket’s roads see around 33 to 35 injuries a day, and 15 or 16 deaths a month from traffic accidents, police said.

Col Wanchai said, “Phuket is a famous tourism destination around the world and millions of tourists, both Thai and foreign, parade into Phuket every year. As the tourists come in, the traffic problem gets worse.

“Keeping them safe when using the roads is getting harder as the available road surfaces are not enough to handle the increase in vehicle numbers. Right now, Phuket has 297,645 registered vehicles, about 208,183 of which are motorbikes,” he said.

As part of the ceremony, the Phuket City Police Department presented 1,000 helmets, donated by the Global i-care Corporation, to 800 motorcycle taxi drivers from 60 stations in Phuket Town. Each driver received a helmet, and the remainder were given to taxi stations in town.

Mother of Phuket murder victim tells of her pain