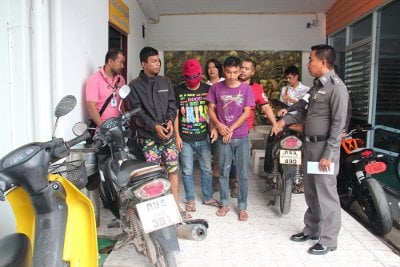 PHUKET: Police quickly arrested three young men today, all of whom have reportedly confessed to no fewer than eight bag-snatches in Phuket’s premier tourism town of Patong.

The arrests followed a bag snatching on the Patong beach road, at 12:36am.

Quick police action saw officers move in and arrest the three suspects – Sarayuth “Ice” Aisuwan, Bunharn “Diao” Banpeung and one man named only as “Ae” – in less than 30 minutes.

The three men were arrested at a rented room in Soi Kok Num, where the trio lived together.

At a press conference at Patong Police Station this afternoon, the suspects confessed they had committed “about eight to 10” bag-snatches, always targeting tourists.

“We have tried to arrest bag-snatchers and set up stronger defensive measures according to the policy of Provincial Police Commander Choti Chavaviwat,” he added.

“Tourists and local residents should be careful not to walk alone along dark streets, alleys and unsafe shortcuts. Also, wear your purse or bag strap across your chest if possible,” advised Col Arun.