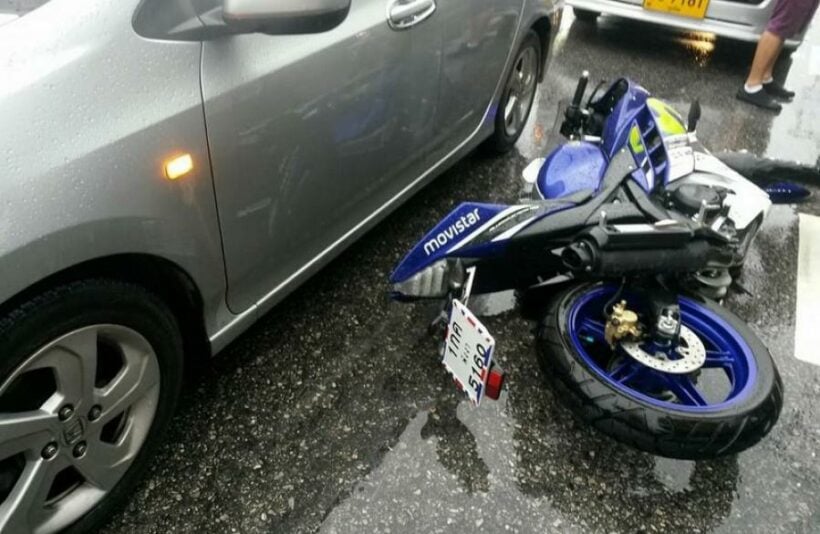 PHUKET: A bike rider was killed after he hit a car, flew off his bike and had his head crushed by an 8-wheeled truck in Phuket yesterday.

“The accident occurred at about 2:30pm on Chao Fa West road near a shop named ‘Prompan’. It was raining heavily at the time. At the scene, we found the body of Jeerawat Chitchua, 26, lying under the truck,” said Capt Ekkarat Chatpai of Wichit Police.

“He was lying face down and his broken helmet lay nearby. His face was covered in blood,” he added.

“We also found a blue Yamaha R15 bike and a Honda City car. We took photos of all the evidence before quickly clearing out the scene to ease traffic,” said Capt Ekkarat.

“Witnesses at the scene said that Mr Jeerawat was driving behind the Honda City from Wichit toward Chalong. The driver of the car braked suddenly, causing Mr Jeerawat to ram his bike into the car. The force of the impact threw him off his bike and he landed under the truck. His head was then hit by the wheel of the truck,” he added.

However, the car driver denied braking suddenly, adding that the motorcyclist was driving rashly and trying to cut him off.

“At this stage, we have yet to charge anyone. We are looking for further evidence and will question more witnesses before coming to a conclusion,” said Capt Ekkarat.

Truck on fire on tarmac at Krabi International Airport