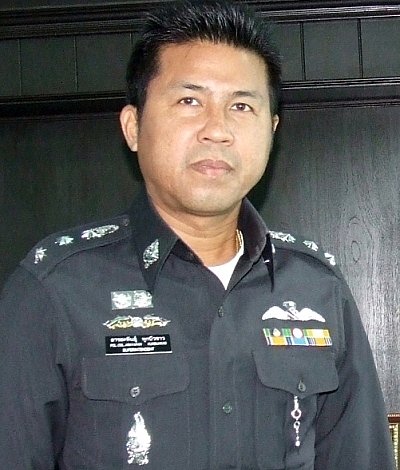 PHUKET: Police in Kathu are boosting their presence on the streets of Patong for Phuket’s tourism high season.

At a meeting with his top officers earlier this week, Kathu Police Superintendent Arayapan Pukbuakhao called for his officers to boost security, in terms of crime suppression and safety, and to work towards reducing the number of accidents involving tourists during the coming months.

The result is more checkpoints and more officers on the street, with an extra presence after the bars close.

To make the extra security possible, officers will be working extra shifts and some will be pulled from desk jobs.

Col Arayapan told the Phuket Gazette, “We have set where the checkpoints in Patong will be and there will be more officers on duty from 2 to 3am.”

The superintendent reminded his officers that bars in the entertainment zone are to close at 2am, and that police are to ask entertainment establishments to switch off their outside lights and make sure they do not make “too much” noise during high season.

“Special officers have been set to look after cases of stolen cars and motorbikes,” Col Arayapan told said.

“Every month we receive reports about stolen motorbikes and stolen rental cars.

“Some of these motorbike owners left the keys in their motorbikes in front of their houses, and some car and motorbike rental businesses were careless in renting out their vehicles. They were not specific when recording the homeland of the person renting the vehicle and some of their cars were driven out of Phuket.

“So officers will remind people to be more careful with their motorbikes, and we will talk with businesses operators to find ways to protect their vehicles,” he said.

As for thieves working Patong Beach, Col Arayapan said plainclothes police will be patrolling the sands, keeping a close watch on tourists’ belongings.

“Many foreigners have had belongings stolen on the beach, but didn’t report it to the police.

“Now there will be more plainclothes officers keeping an eye out along the beach and reporting any thieves they see.”

The local lifeguards will assist in this effort, he said.