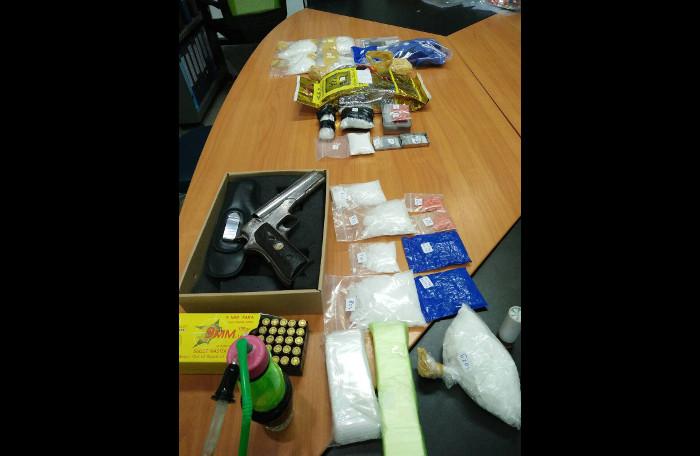 Police seized more than 2.5 kilograms of crystal meth (ya ice) and 6,400 methamphetamine pills (ya bah) with a total value of about 5 million baht.

“Narachai Chuatchuea, 33, was arrested at his rental room in Talad Yai on Wednesday (May 4). He was in possession of 13 ya bah pills,” said Capt Suchat Chompooseng of Phuket Provincial Police.

That arrest led police to Jarin Ratanasin, 34, who had on him eight grams of ya ice when he was arrested in Thalang on Thursday (May 5).

Police then arrested Mongkul Chetthanpan, 23, at rented accommodation in Thalang, where officers found 239 grams of ya ice, 492 ya bah pills, a homemade gun, two shotgun cartridges and 35 0.9mm bullets.

That evening, investigators closed in on the man they believed to be the main supplier of the other three suspects. Chuchat Wanwichaikun, 35, was arrested after officers found him in a pick-up truck parked on the side of a road in Mai Khao. Stashed in the truck were almost two kilograms of ya ice (1,941 grams) and 5,580 ya bah pills.

Police also made a fifth drug-related arrest on Thursday, apprehending Sovarit Kaewpaitoon, 23, who had on him 66.9 grams of ya ice and 368 ya bah pills when police searched him in the parking lot of an apartment in Talad Yai, Phuket Town.

He was also charged with possession of Category 1 drugs with intent to sell.

A Decade Ago: Crowne Plaza, work permits and Chinese tourists