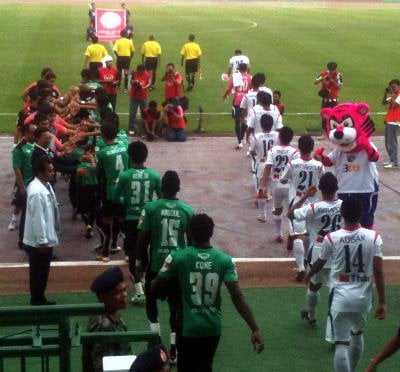 The ‘Southern Sea Kirin’, as FC Phuket is sometimes known, got the scoring underway on 15 minutes with slick passing between Niran Phanthong and Nitirote Sukuma that left sure-footed Kone Adama with a tap-in right in front of the goal.

After dominating play during the opening stages of the second half, BBCU equalized on 70 minutes, much to the delight of the estimated 200 BBCU supporters attending the match.

Exciting yet scrappy play ensued, with BBCU ending up with just 10 men going into overtime after the final whistle.

In extra-time, a technical goalkeeping blunder by the BBCU goalie was the turning point, as the referee gave a free kick just a few yards outside the penalty area and BBCU lined the entire squad across the goal line.

The ensuing shot came off an arm of a BBCU defender and a penalty kick was awarded.

FC Phuket star Nene Bi waited as the BBCU players mobbed the no-nonsense referee, then calmly converted the winner to put his team into the round of 16 in Toyota Cup Play.

At the end of the game, security volunteers had to escort the referee and his assistants off the pitch.

Nene Bi was once again named “Man of the Match” for his performance.

The match also marked the first game for French goalkeeper Jonathan Mathijas, who played a solid game and adds a new look to the team with his stocky, aggressive play and signature half-mohawk haircut.

After the match, the coaches of both teams exchanged kind words and agreed the game could have gone either way.

A crowd of about 6,000 local supporters left the stadium very happy that FC Phuket came out on top.

Federer out, Murray in