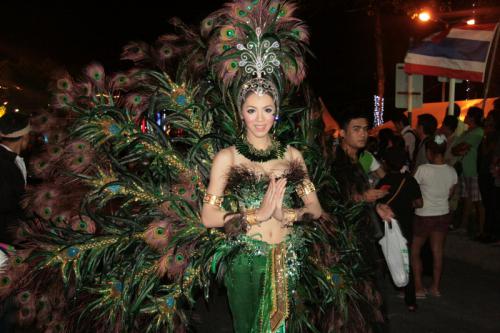 PHUKET: The island’s premier party town of Patong is set to kick off the Phuket tourism high season with its annual carnival, from December 15 through December 20.

“Phuket is ready to host thousands of tourists this coming high season. Be assured that you will have a wonderful time here and be impressed with the beauty of our island,” says the new Kathu District Chief, Sayan Chanachaiwong. “Authorities will do their best to make sure you have a good, safe trip.”

Organized by the Patong Municipality, much of the live entertainment throughout the festival will be performed on two stages. Stage One will be a beachfront stage next to the police box at the end of Soi Bangla; Stage Two will be at the football pitch next to Loma Park.

In addition to the live entertainment and the traditional parade, a giant Ferris wheel is expected to appear on the scene, with its erection complete by the start of the festivities.

The municipality has yet to release a final schedule of events.

However, the theme this year was announced last night: “Patong Fun Fest”.

“We chose the theme “Patong Fun Fest” to show everyone the joys and pleasures they can have when they visit Patong,” Mr Sayan said.

Patong officials are hoping to generate up to 100 million baht during the six-day event.

“On the final day, there will be a scuba diving competition to see who can pick up the most trash,” Mr Sayan said. “There will also be several other activities to encourage people to take care of the environment so we can keep the nature around us beautiful forever.”