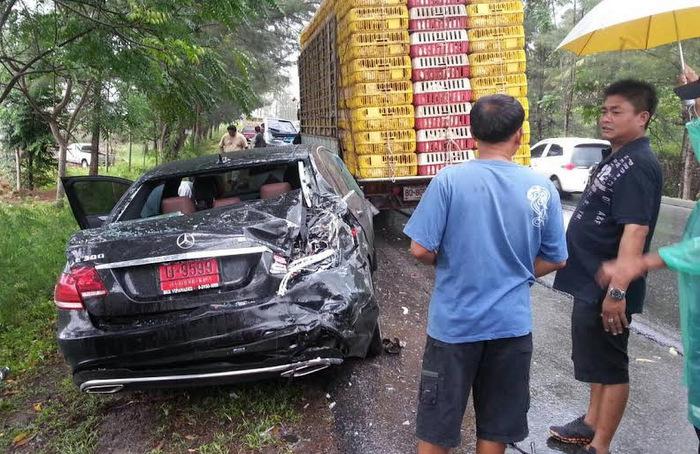 PHUKET: A six-wheeled truck hauling a battery of chickens bound for Krabi crushed a brand-new, 4-million-baht Mercedes-Benz belonging to a local official in Mai Khao, in the north of Phuket, on Saturday.

The accident took place at 11am on Thepkrassatri Road northbound, about 300 meters from the entrance to Sai Kaew Beach.

“It started raining heavily so I got back in my car, then the chicken truck hit me.”

Mr Sarawut’s Mercedes E300, still sporting the red dealership license plates, plowed into a pickup truck that was parked in front of him.

Chicken driver Ken Pimpranom, 45, told police that he lost control of the truck because of the heavy rain.

“It was so heavy I couldn’t see the road,” he said. “Fortunately, nobody was injured.”

All three vehicles involved in the accident were taken to the Tah Chat Chai Police Station.

Still no extradition request for Phuket fugitive arrested a month ago