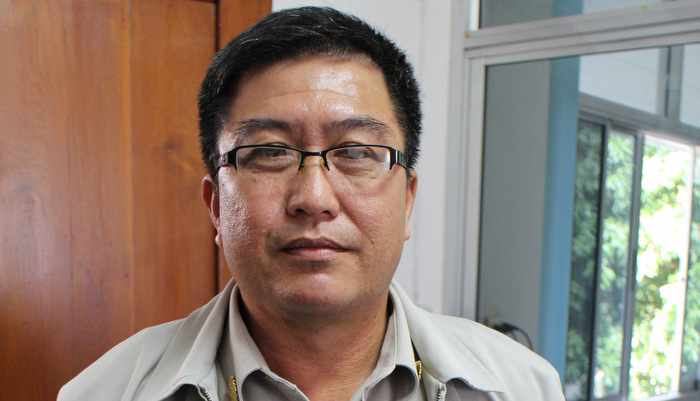 PHUKET: Kathu District Chief Sayan Chanachaiwong has vowed that the sandbags in front of the Patong Bay Garden Resort will be removed from the beach, or resort owner and Patong kingpin Preechavude “Prab” Keesin, son of former Patong Mayor Pian Keesin, will have to answer to the military.

In a public display of conscientiousness, the officials watched as a backhoe broke apart several sandbags that form a seawall to protect the resort from high-tide waves (story here).

However, work on removing the sandbags stopped soon after the officials moved on to Tri Trang Beach, south of Patong.

The sandbags remain on the beach today.

Mr Sayan has since explained to the Gazette that the backhoe could not continue work due to the incoming high tide last Friday afternoon.

“The backhoe operator did not have enough time to remove all the sandbags,” Mr Sayan said.

“However, the Patong Bay resort must clear everything from the beach by the time we have cleared Tri Trang Beach. If they do not comply with the military order, they will be charged with failure to obey an official order.”

Exactly when that would happen Mr Sayan did not care to say, though Prab Keesin promised that he would clear the beach after the southwest monsoon season was over – which will be sometime in late October.

“The chairs, tables and trees have been removed already, but we cannot remove the sandbags right now,” Mr Prab said.

“The sandbags protect the resort from the waves at high tide. If we removed them now it would cause a huge amount of damage to the resort and it would be dangerous for our hotel guests and diners in the restaurant.

“I promise I will clear it all after the monsoon season, and I will fix the front of the resort to protect it from the waves.”