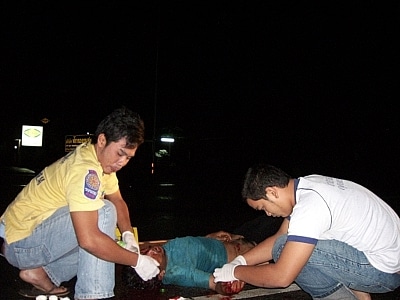 PHUKET: A Thai man whose surname translates to “likely to escape disaster” was walking home from a Phuket karaoke bar last night when he was assaulted and left for dead by the side of the the road in Thalang.

When Kusoldharm Foundation rescue workers arrived at the scene just after midnight, they found 33-year-old Wiwat Khongrodpai lying on the road to Pa Khlok, about one kilometer east of the Heroines’ Monument.

A bloody metal bar and a length of wood were found nearby.

Despite a gaping wound to his head and many other wounds to his body, the workers were able to partially revive him and rush him to Thalang Hospital for emergency treatment.

Thalang Police questioned the victim, a construction worker originally from Nakhon Ratchasima, at the hospital.

Mr Wiwat, whose surname translates literally to “likely to escape disaster”, told officers he was at a karaoke bar near the Heroines Monument before the attack.

He could not recall the name of the establishment, however.

When he reached his limit of alcohol, he decided to walk back to his home near Baan Pa Khlok, several kilometers away, he said.

En route, three youths on a motorcycle approached and beat him before fleeing, he told police.

He knew of no reason for the attack, as he had never had any problems with anyone before, Mr Wiwat told police.

One of the rescue workers told the Phuket Gazette that Mr Wiwat could easily have been run over by a car as the area was dark.

Nearby residents likely heard the attack and reported it by calling the 1669 emergency number, but were too afraid to go outside until help arrived, the rescue worker said.