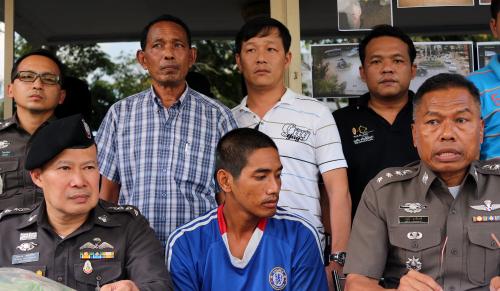 PHUKET: The killer of a man found dumped by the side of a road in Rawai last month was collared when his wife was spotted using the victim’s mobile telephone.

The body of Anuwat Kathong, 25, was found wrapped in a blanket by the side of a road in Rawai just after midnight on July 4 (story here).

“The victim had the mobile with him when he disappeared,” Phuket Provincial Police Deputy Commander Arun Kaewvatee told a press conference yesterday.

“He also moved from Rawai to Rassada during the investigation, and we believed he was trying to hide from us,” Col Arun added.

“We found his new address, got an arrest warrant and picked him up this morning while he was walking near his soi in Rassada.

“Mr Isara confessed that he murdered Mr Anuwat over a drug deal gone bad. He said that they had met on July 2 in Mr Anuwat’s room in Rawai to try to settle their conflict.

“They couldn’t make up, their fight escalated, and Mr Isara hit Mr Anuwat on the head with a glass bottle, then used a piece of iron wire to strangle him,” Col Arun reported.

“When Mr Anuwat was dead, he wrapped his body in a blanket and hid it behind his house. The next night at about 10pm, he borrowed a sidecar from his neighbor to dump the body in Soi Saiyuan 17, about two kilometers from his room, where it was discovered a few hours later.

“Mr Isara also confessed that he gave Mr Anuwat’s phone to his wife and sold his gold necklace, worth about 5,000 baht, to a gold shop,” Col Arun said.

And because the crime involved drugs, we are now investigating the drug network, he added.