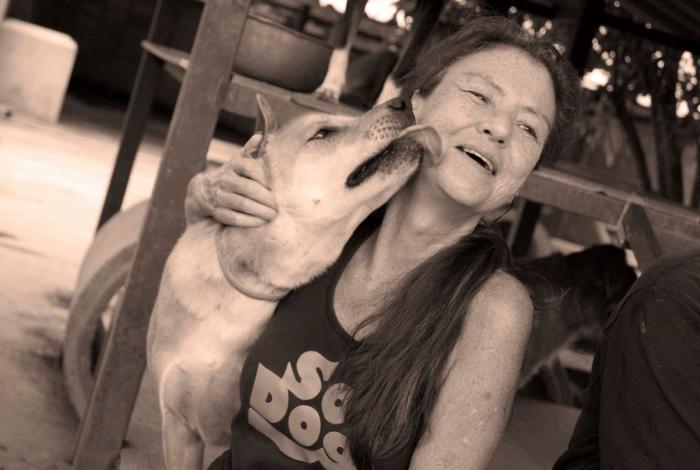 PHUKET: The untimely death of Gill Dalley, who was a prominent member of the Phuket community and co-founder of the Soi Dog Foundation, was announced early this morning by foundation representatives.

Ms Dalley was 58 years old and battled cancer for a short period of time.

She was the inaugural winner of the ‘Canine Hero of the year’ award at the 2011 Animals for Asia conference in Chengdu, China, and the first non-Asian by birth to be named ‘Asian of the year’ by Channel News Asia, Singapore, in their annual awards.

“It is with deepest sadness that we announce the passing of Soi Dog co-founder Gill Dalley, after a short battle with illness. Out of respect for the family’s privacy, no further statement will be made at this time, although more information will be available in due course,” the foundation announced on its Facebook page.

The Network for Animal Protection (NetAP) expressed their condolences at Ms Dalley’s passing.

“Deeply shocked, we take note of the death of Gill Dalley, co-founder of our long-time partner, the Soi Dog Foundation’. We can’t find any words, only sadness. Gill, we will never forget you,” they announced.

Ms Dalley and her husband John retired to Phuket in 2003, from Yorkshire, UK. The couple teamed up with Margot Homburg, a Dutch retiree who had registered Soi Dog Foundation as a Dutch foundation the year before.

Working together as dog catchers and nurses, the three of them ran mobile clinics, utilizing volunteer vets from overseas, mainly at their own expense. A year later, Ms Dalley, who had been weakened by a broken rib, developed septicemia while rescuing a dog and was given a 10 per cent chance of survival.

She survived, but lost both lower legs and suffered damage to her arms.

She also lost her best friend, Leone, in the tsunami, and counseled survivors and relatives of victims.

Ms Dalley was the driving force in expanding the work of the Soi Dog Foundation, including the establishment of its first shelter, while her husband focused on countering the illegal dog meat trade.

Over the past three years she designed and oversaw the construction of the largest hospital entirely dedicated to street dogs in Asia, as well as a state-of-the-art animal shelter.

Today, the Soi Dog Foundation is the largest one in Asia working with stray dogs and cats. Employing nearly 200 staff, it is registered in seven countries and aims to achieve 100,000 sterilizations per year, and to end the Asian dog meat industry.