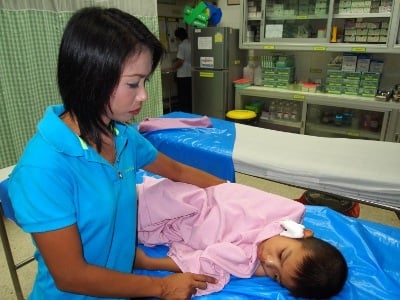 PHUKET: The 7-year-old victim of a screwdriver attack by a mentally ill man in Phuket Town has recovered from his physical injuries, but his mother fears that the psychological trauma caused may take much longer to heal.

Krittamet “Best” Kingsaiyut’s mother, Chareerat Naksri, was told by doctors that the stab wound to her son’s head was only two centimeters deep. The x-ray examination revealed that the screwdriver used to inflict the injury hit underlying bone, thus preventing the tool from penetrating any deeper.

“Even though the wound is getting better, his mind is not. He is frightened of strangers, especially men. When we go out his father or I must be with him, as he won’t walk alone. He was not like this before,” said Ms Chareerat.

“Now if he sees too many strangers he wants to go back home,” she added.

Best’s parents are trying to give him as much support and comfort as possible, but they are concerned that his mental state does not appear to be improving.

They are considering taking him back to see the doctor if there are no signs of his condition improving.

Ms Chareerat said that while she was at the hospital the mother and brother of Best’s attacker visited. She was told that they would be taking the attacker to the Mental Health Department at Srithanya Hospital.

“I do not think what happened to my son should have occurred. Anyone who has a family member with a mental condition should take proper care of them. People like this are not supposed to be walking around in public – not when they might attack someone randomly.”