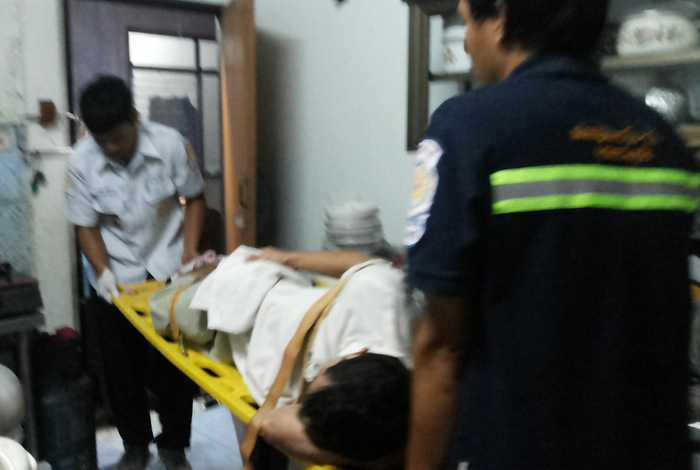 PHUKET: Police are scouring Phuket for two attackers who gunned down a man in Cherng Talay last night.

Officers were called to a home in Pasak Soi 8, where rescue workers were tending to Rattikorn Weeraphruk, 25, from Roi Et, who was bleeding on the kitchen floor after being shot twice.

Mr Rattikorn told police that he was riding his motorbike home from work at about midnight when he slowed down to park in front of a Family Mart convenience store.

But he changed his mind after seeing a man he named only as “Mr Ake” outside with another man.

“I sped off, but Mr Ake and his friend chased me,” Mr Rattikorn said, adding that they gunned him down while he was trying to escape down a small street.

“When they saw I was shot and that I had fallen off my motorbike, they took off. Then I dragged myself to the nearest home and called out for help.”

Mr Rattikorn declined to reveal why Mr Ake wanted to shoot him.

“We believe it was a revenge attack from a previous personal conflict,” said Lt Jirasak Sungwisut of the Cherng Talay Police.

“Mr Rattikorn is still in Thalang Hospital. He was shot in the hip and in the foot. We will question him further after he is released into a general care ward.”

Lt Jirasak said his officers had yet to review CCTV footage from in front of the Family Mart.

“We have descriptions of the suspects and hopefully we will soon have images of them to hand out to other police stations,” he said.

“In the meantime, we will continue to question witnesses.”

Body of woman with hands bound washes onto Phuket beach