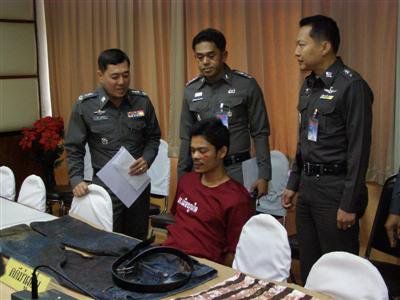 PHUKET CITY: Following an argument over a 10,000 baht debt, a man stabbed his friend to death as they were driving together in Phuket City.

Nathee Pinyayo, a 30-year-old resident of Phang Nga’s Kuraburi District, confessed to slashing 34-year old Pornsil Makphol’s neck and stabbing him several times in the chest while Mr Pornsil was driving, just after midnight on October 11.

Both men had spent the night drinking at Tawandaeng, a ‘songs for life’ restaurant in Phuket City.

Mr Nathee told a police that he became enraged when Mr Pornsil suggested he did not plan to pay back a 10,000 baht loan.

“At first, I only intended to punch him in the face, but he punched me back and tried to get a gun out of the glove compartment,” said Mr Nathee.

“I cut his neck and tried to sit on his lap to control the driving wheel, but he was still alive so I stabbed him many times with my little knife,” he said.

Mr Nathee said he was ‘very sorry’ for what he did.

The two men had been friends for a long time, he said.

On the night of the murder, police received a report that a car had crashed into a ditch on Ruam Pattana Road in Phuket City.

At the scene they found Mr Pornsil soaked in blood, dying in the driver’s seat of the sedan.

His neck had been slit and he had multiple stab wounds in the chest.

Kusoldharm Foundation rescue workers rushed him to Mission Hospital but he died on route.

Witnesses to the crash told police they saw a man with blood on his clothes emerge from the car and hitch a lift from the scene with a passing motorcycle rider.

Searching homes in the area, police found Mr Nathee at 3am.

He had bruises on his face and his body and feet were dirty.

He confessed to committing the murder, showing police the bloodstained clothes he had hidden behind the toilet.

He will be prosecuted on one charge of murder.

Why did Phuket police officers cross the road?