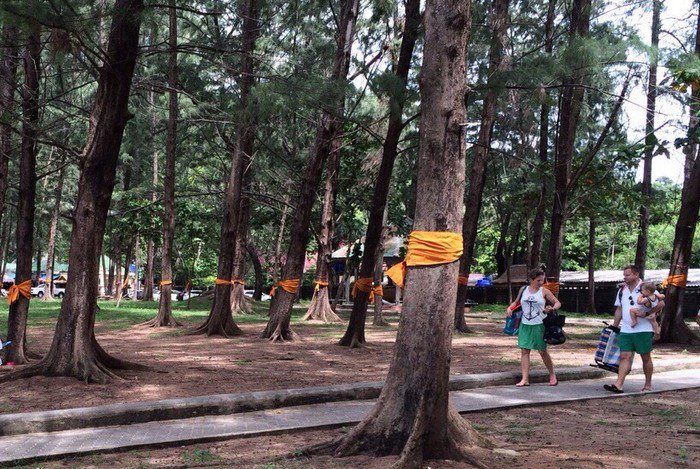 “We of course listened to what the community had to say,” Mr Aroon told the Phuket Gazette.

Mr Aroon explained that after the public hearing, it was clear that a new location would need to be found for the 40-million-baht facility.

“Though I was not able to attend the meeting, I understand that the consensus was that the community did not want the project to move forward, despite it having already been approved,” said Santi Pawai, director of the Ministry of Tourism and Sports Phuket Office. “I now have to meet with the Department of Tourism on Monday to explain why the project will not go ahead.”

More than a hundred Thai and foreign members of the southern Phuket community joined the meeting at 7pm last night to voice their concern about the project, which had been slated to start earlier this month.

The project came into the limelight when a number of trees in the beachfront grove at Nai Harn were marked to be cut down to prevent their roots damaging the yet-to-be constructed facility.

The fast growing trees are about 30 years old and very important to the community, explained 41-year-old Sayjai Mueller. Locals set out to prevent the destruction of the trees by wrapping them with pieces of saffron-colored fabric and protesting the planned construction.

In response, Mr Santi agreed to have the construction company redesign the building in order to do no harm to the trees (story here). However, even this did not meet with local support.

“Both Thais and foreigners joined the meeting to tell the government that we don’t want any changes to our beautiful beach,” said Ms Sayjai.

“If the museum was built, our narrow roads would be inundated with buses and cars. I don’t want to see our community end up like Promthep Cape, which is overcrowded.

“Think about it. Even if only five buses a day came to our beach, it would be ruined. Who in the community could enjoy it then? We would no longer be ranked as one of the best beaches in Asia.”

In February, Nai Harn Beach made TripAdvisor’s list of the top 10 beaches in Asia (story here).

“We had no intention of causing harm to the area. We just wanted to build a new tourist attraction for visitors. A place where they could rest and also use the facilities,” said Mr Santi earlier this month. “We don’t want to get pinned as the bad guys in this situation. There was simply a misunderstanding.”