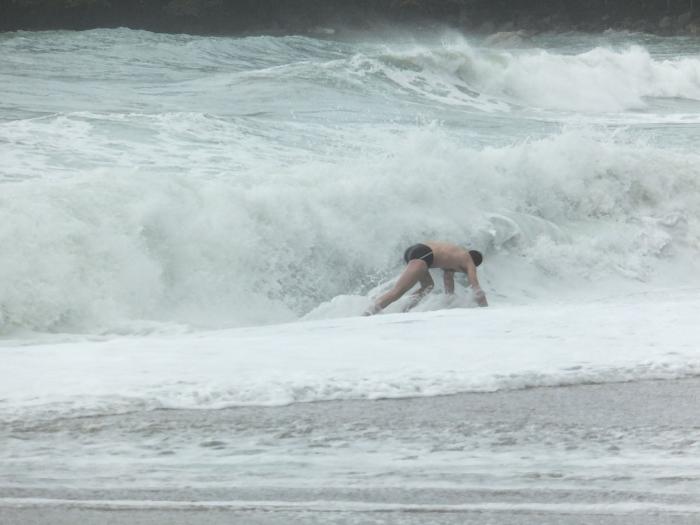 PHUKET: Lifeguards at Phuket’s beaches are exasperated by tourists blatantly ignoring warnings not to swim and risking their lives playing in the rough waves.

“A lot of beachgoers are completely ignoring the red flags, and they won’t even listen to the lifeguards when we try to stop them,” said Singsom, the head lifeguard at Kata-Karon.

Despite the frantic whistling of the lifeguards, tourists still tempt fate by wading into the strong surf at Karon Beach. Video: PGTV/Karon Lifeguards

“Please help tell the tourists not to swim in the red-flag zones. It is so very dangerous with the monsoon season now here. They can so easily drown in these rough conditions,” Mr Uten told the Gazette.

Among those who have lost their lives after ignoring lifeguard warnings at Phuket beaches are a 27-year-old Chinese man who died at Karon in February (story here).

In August last year a Chinese tourist died while swimming in the no-swim zone at Karon Beach. (story here).

The waves at Bang Tao Beach swallowed up a Korean man in his twenties in July 2015 (story here).

On New Year’s Eve a Latvian woman was dragged out to sea and drowned while her horrified family looked on at Mai Khao Beach (story here).

Fierce storms cause more than B300,000 worth of damage