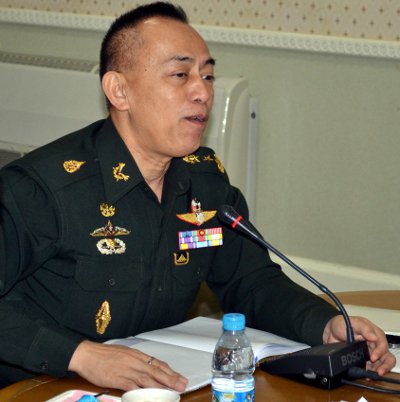 PHUKET: Encroachment on protected forest land and illegal land ownership were the top two issues identified by a panel of specialists who recently conducted a fact-finding tour of Phuket, Phang Nga and Krabi.

The panel of five from the National Coordinating Center for Special Security reports to the Internal Security Operations Command (ISOC), which will report its findings directly to the Prime Minister’s Office.

“We have identified the problems regarding forest encroachment and illegal land ownership and we will report these problems to – and coordinate with – the relevant agencies,” said Lt Gen Akanant Ratanasopar, the center’s director.

Mr Phoppol identified the lack of consistent policy as one of the main issues hindering enforcement of land rights.

“The [central] government should be clear about forest policy, but the problem we have found is that the policy changes with each government,” he said.

Degraded forest land permitted to be used for other purposes was another problem.

“They should allow us to specify the location and amount of land to be reserved as a forest area. They should not change their minds and allow land with degraded forest to be used for other purposes.

“No matter how bad the land is, we should take measures to recover and rejuvenate it. We should improve decaying forest areas by growing plants. If we give up our decaying forest land to others, we will have no more land on which to grow trees,” Mr Phoppol said.

“We have to follow the policy of the current government, but it is hard for us to take action when there is no consistency,” he added.

He cited the differences between land usage rights under the SorPorKor system versus “Community Chanote” titles.

SorPorKor deeds are issued to allow those with low incomes to occupy and farm – but not own – state land.

“Community Chanote” titles, however, are issued so villagers can maintain their right to live on communal land that no particular individual owns.

“The government should make clear exactly where SorPorKor should be issued so we can ensure land is used appropriately,” Mr Phoppol said.

Chaloemkiat Susakorn, fellow team member and a specialist at the Forestry Department, said encroachment was widespread in Phuket, with both local residents and “influential people” engaging in the activity.

The team discovered most cases of encroachment fell into two categories: illegal issuance of land deeds; and using land for purposes not permitted under a legally issued deed.

SorPorKor and NorSor 3 are the most commonly misused type of deed.

“Local authorities must enforce proper use of land. For example, if a title permits only agricultural use of hillside land, the holder should not be allowed to build a resort on it,” he said.

Mr Chaloemkiat warned that those who construct on land where it is not permitted will face “problems” in the future.

“For those who have title deeds that were issued illegally, it is our job to investigate and reclaim that land,” he said plainly.

“We will need to collaborate with many agencies to solve this problem, especially the Land Department. We will be taking aerial photographs of areas under investigation and supply these to a court with the view of revoking ownership,” he added.