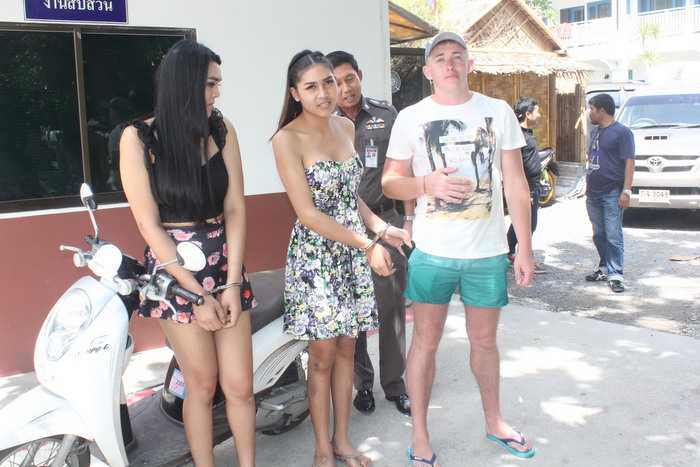 PHUKET: A pair of pick-pocketing ladyboys were arrested in Phuket yesterday after two tourists reported having been robbed by the duo while receiving a hug.

Pavel Abramov, 24, from Russia, and Moris Fosaati, 38, from Italy, both reported at separate times to Karon Police on Monday that they had been pick-pocketed by two ladyboys, said Karon Police Deputy Superintendent Sophon Borrirak.

“The two men explained the same scenario: the ladyboys pulled up next to them on the street to talk. About five minutes later, one of the ladyboys stood up to give the men a hug, and lifted items from their pockets,” Lt Col Sophon explained.

Mr Abramov had his iPhone stolen near Bangla Road and Mr Fossati had his wallet, containing 1,000 baht and 1,000 euros, stolen from him on a street behind the Kata Beach Resort and Spa.

Police used a signal from Mr Abramov’s iPhone and CCTV footage to track down Chokamnuay Rongjuttu, 26, and Soonthorn Huajaipetch, 18. They were found in Karon riding the motorbike they had used in the “hug and run” crimes.

“We matched the descriptions given to us by the victims to CCTV footage at the Koktanod intersection,” said Col Sophon.

“We found and arrested Mr Chokamnuay and Mr Soonthorn in Karon. They told us that they had spent all of the cash and stashed the iPhone in their apartment in Patong.”

The suspects led police to the apartment and confessed to the thefts.

“We are sorry. We were drunk and needed the money just for fun,” Mr Soonthorn said.

Both ladyboys were charged with theft.