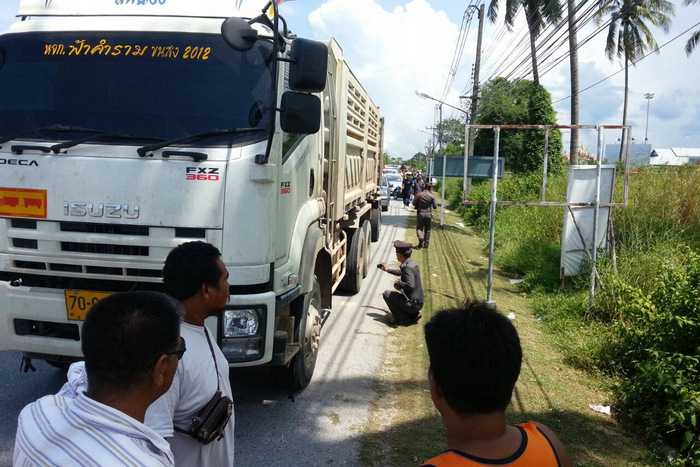 PHUKET: A truck driver has been taken into custody after one woman was crushed under his 18-wheeler and another woman injured at the Tah Chat Chai checkpoint yesterday morning.

The driver of the truck and trailer, Niran Sawasdee, 37, told police that he was driving onto Phuket from Phang Nga when the accident occurred at about 11am.

“I didn’t see there was a motorbike riding alongside when I turned left onto the main road after clearing the checkpoint,” he said.

The motorbike and the rear wheels of the truck collided.

Sunisa Thinbangtiao, 40, the passenger on the motorbike, died instantly when she was crushed under the wheels.

Jirapa Korsuwan, 19, who was driving the motorbike, escaped with minor injuries.

Rescue workers from the Kusoldharm Foundation administered first aid to Ms Jirapa at the scene before delivering her and Ms Sunisa’s remains to Thalang Hospital.

“He was placed under arrest will be tested for drug use while we continue our investigation,” said Lt Santi Prakobkarn of the Tah Chat Chai Police.

Phuket freedive floats Wierenga to third in US rankings