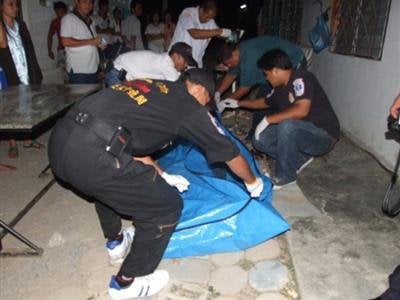 PHUKET: Six months after gunning down an ex-friend and colleague in Phuket, a former Patong tout is in police custody after his arrest in his home province of Nakhon Sri Thammarat on Monday.

He was helping his mother, a local fishmonger, at the time.

Mr Viroon confessed to the murder, saying the April 15 slaying of Pornsak “James Patong” Thongbaiyai was driven by anger and vengeance after Mr Pornsak, also of Nakhon Sri Thammarat, betrayed him.

Mr Viroon told police the pair were once close friends who worked together as touts on Soi Bangla.

However, Mr Pornsak’s aggressive behavior and failure to respect Mr Viroon as his elder soured the friendship, police said.

He carried out the attack only after Mr Pornsak threatened to kill him, Mr Viroon claimed.

The suspect said he acted alone and that another suspect, identified as Ekapop “Yai” Tawisuwan, was not involved, Col Kraithong said.

However, police are still seeking Mr Ekapop, who was riding pillion on the same motorbike at the time of the killing and fled the scene on foot. Two other motorbikes, each with one male and female aboard, were also present at the scene, police said.

Mr Viroon was charged with premeditated murder and is now in custody at Phuket Provincial Prison.

The news of the shooting, which took place over the Songkran holidays, led to a call for a handgun crackdown in Thung Thong Police District.