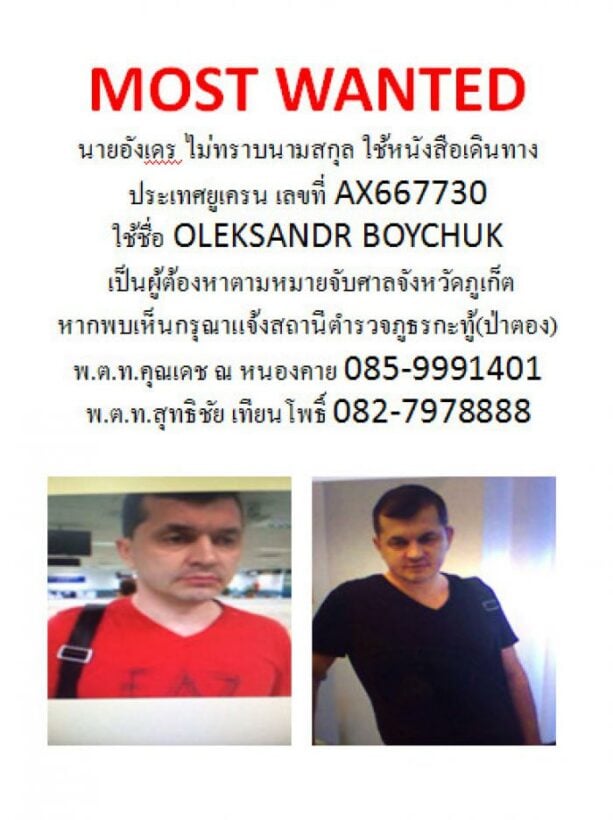 PHUKET: Police heading the investigation into the alleged kidnapping of Iana Strizheus and Alexey Slabinskiy have confirmed that one of the two main suspects is a Russian fugitive.

“We know only that he was wanted for a crime that involved inflicting personal injury.”

Mr Boychuk and Russian Aleksandr Novichkov, 58, were named last Friday as prime suspects in the disappearance of Ms Strizheus and Mr Slabinskiy, and arrest warrants were issued for both men on charges of gang detention, gang robbery and attempted sexual assault (story here).

Offering an in-depth look at Mr Boychuk’s criminal past, Russian newspaper Izvestia yesterday reported that relatives of the couple claim that Mr Boychuk introduced himself to Ms Strizheus and Mr Slabiniskiy as Andrei Smirnov when the three met in Phuket in 2012.

The relatives also said that Mr Boychuk once went by the name of Andrei Zabelin, as well as Andrew Zabelin (story here).

Mr Zabelin is a former officer of the Russian Pacific Fleet, wanted in Russia since 2007 for jumping bail while on trial for shooting a man with a “non-lethal” firearm in Vladvostock in 2005 (story here).

The shooting was over a dispute with a neighbor smoking in the stairwell of the apartment building Mr Zabelin lived in.

While on trial for the shooting incident, Mr Zabelin was accused of selling 49 million rubles (44.7mn baht) of Navy property.

He absconded while on bail and was last reported as entering the Ukraine in March 2013 (click here).

“However, they have nothing to do with the case. We will not drag them into it,” he said.

Police believe both prime suspects Mr Boychuk and Mr Novichkov are still on the island.

“We are working on this case 24 hours a day. We expect to arrest them and to safely recover Mr Salbinskiy soon,” Col Arun said.