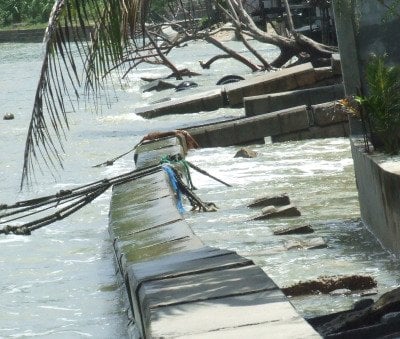 PHUKET: Phuket has joined an Andaman-wide project spearheaded by the Prince of Songkla University (PSU) Haad Yai Campus to combat coastal erosion throughout the region.

“I have already sent our plan for rebuilding the Laem Tukkae seawall to the PSU for them to study as it needs specialist input. This didn’t happen with the previous seawall and it didn’t last,” he said.

Large waves brought on by the wet-season monsoon last year damaged homes at the small sea gypsy community, forcing villagers to seek refuge with family members or even sleep outdoors.

This year, Mayor Phudit expects that employing outside assistance will push the project cost to about 30 million baht, as opposed to 17mn baht for the old seawall, which fell apart within months.

“We need to study factors such as wave action and the specific environment as it needs a unique design. It’s not only about building the wall, after deciding on a plan we need to hold a public hearing to ensure villagers agree with it,” Mayor Phudit said.

Sawad Samukpong, one of the members of the informal group formed to combat coastal erosion, explained to the Gazette that a previous plan to stave off coastal erosion throughout the South was drawn up, but never implemented.

Now his team intends to put a pilot plan into practice in a few locations to see how it works to prevent further coastal erosion.

“Phuket suffers serious coastal erosion at Bang Tao Beach in Kamala, at Rawai, at Nai Yang Beach and at the Laem Tukkae sea gypsy village on Koh Sireh,” he said.

To facilitate input into the new plan, a large seminar was held at the Katina Hotel in Phuket Town on Thursday to discuss and decide on a general practical plan to combat coastal erosion along the Andaman coast, he added.

The seminar, organized by Department of Marine and Coastal Resources and PSU Phuket Campus, is the direct result of Prime Minister Yingluck Shinawatra raising coastal erosion as a topic of concern at the mobile Cabinet meeting in Phuket in March.

At that Cabinet meeting, the Engineering Faculty at the PSU Haad Yai Campus was assigned to co-ordinate the drawing up of the six-province plan.

Attending the seminar were provincial and local government representatives from the Andaman provinces and the relevant NGOs [non-governmental organizations], Mr Sawad said.

“After the seminar in Phuket, we will hold smaller, area-specific meetings in the Andaman provinces of Ranong, Phang Nga, Krabi, Trang, Satun and Phuket,” said Mr Sawad.

“We will also study all the damage points because those places have different sets of problems. Once that is done we can then put the pilot plan into action in specific locations, and after that request the budget to carry out the full plan,” he added.